As energy management on energy-constrained devices continues to challenge researchers and frustrate users, device designs are addressing the problem by integrating more hardware components that can trade off energy and performance. Dynamic voltage-and-frequency scaling (DVFS) allows CPUs and memory to trade off speed and energy, buffering and polling rates allow radios to trade off latency and energy, and screen refresh rates allow displays to trade off quality and energy. And as the Dark Silicon utilization wall forces systems to choose what parts of the CPU to operate, the already-large configuration space will explode. This proposal refers to the emerging class of devices integrating multiple energy-proportional components as power-agile, reflecting their potential ability to adaptively reallocate energy usage between components to improve performance and save energy. But as energy-management features proliferate, new interfaces enabling coordination between applications, the operating system (OS), and hardware are urgently needed to realize the potential energy and performance benefits.

Our proposal describes a new architecture for power-agile systems with both novel interfaces that cleanly separate energy management responsibilities and a new approach to energy allocation driven by differences in hardware energy efficiency. Applications use resource requests to allocate energy between hardware components, making their resource needs explicit. The OS manages energy by using the application’s priority to determine an inefficiency allocation, which controls how much extra energy the application can consume to improve performance. Hardware energy usage is controlled through per-component energy constraints, which facilitate OS control while allowing components to maximize constrained performance. By improving energy coordination and allocation, the system achieves energy-efficient performance not currently possible.

Enabling power agility requires research at both the application-OS and OS-hardware boundary. At the application-OS boundary we will invent a new interface allowing applications to allocate energy between components that expose energy-efficiency tradeoffs. This interface requires new ways to describe energy balance between components, language support for programmer annotations to guide the tuning process, and libraries of algorithms to support unannotated applications. Resource request traces will also help inform hardware design and consumer purchases in exciting and novel ways. At the OS-hardware boundary, a new energy management interface must be invented allowing the operating system to effectively set energy constraints, and new ways to support this interface in hardware must be explored.

While resource requests allow applications to adjust energy balance between components, the OS must remain in control of total energy usage in order to prioritize energy between applications and over time. Because the energy efficiency of many hardware components changes along with their energy-performance settings, we propose to investigate inefficiency as an novel energy allocation mechanism. This approach has the potential to address many of the limitations of previous attempts at OS energy management.

The proposed broader impact activities will excite the next generation of computer scientists about power-agile design and build a shared knowledge and development base within the energy management community. First, a publicly-available component energy usage database will be established and seeded with both device and component energy measurements and workloads developed during the project. This will meet a critical need in the energy management community, as reliable numbers for components are difficult to obtain and few appropriate workloads are available. Standardizing and sharing this information will accelerate research in this area. Second, support for energy-proportional components and Dark Silicon features will be added to the popular gem5 simulator and made available for other researchers to use. Finally, a new graduate course on power-agile computing will be developed and taught by the co-PIs. 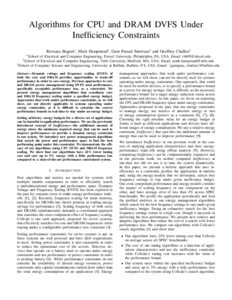 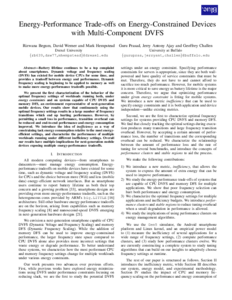 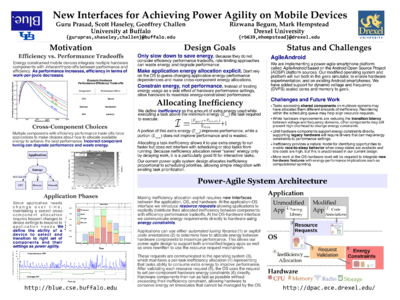 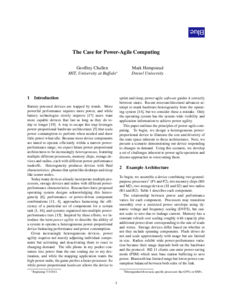