With the usage of energy-constrained smartphones exploding, smartphone energy management has received an increasing amount of attention. Researchers have succeeded in developing new energy models, measurement tools, and more efficient implementation of common primitives such as localization. But together, these advances have failed to fully address the problem, with users reporting battery lifetime as not only their top concern with today’s smartphones, but a worsening concern. Already unsatisfied with device lifetimes, smartphone users are less likely to explore the growing number of innovative apps, so if the full potential of smartphone devices is to be realized, more innovation in energy management is needed.

This project proposes a new cross-device application energy management framework for Android smartphones called Jouler. Jouler has three goals that distinguish it from current approaches. First, Jouler is automated, controlling app energy consumption without requiring user input. Removing the human from the loop requires Jouler to be able to distinguish between high app energy consumption caused by legitimate app requirements from that caused by software bugs. Second, Jouler is flexible, encapsulating energy management strategies in policy modules that users can assign to each app. Data collected on the PhoneLab testbed shows significant differences in app usage, charging patterns, and battery lifetime expectations between participants, and policy modules give Jouler the flexibility required to support this variation. Third, Jouler is cross-device, allowing full integration into the Android platform and deployment on all Android smartphones. Because hardware energy management capabilities different significantly across components, Jouler must provide a new abstraction layer to ensure that policy modules are portable across multiple devices integrating different hardware components. To evaluate the ability of Jouler to improve smartphone energy management, it will be integrated into the Android platform and tested on the PhoneLab smartphone testbed, the only public testbed able to distribute platform updates.

Realizing Jouler requires addressing two significant open research challenges. First, while measuring app energy consumption has received a great deal of attention, putting consumption into context has not. Consumption alone may provide helpful feedback to users, but is not sufficient to enable effective policies, since the behavior and efficiency of different apps varies, as does their importance to each user. These uncertainties make energy consumption alone usable for human interpretation, since users can use their own experience to put the numbers in context, but unusable for automated response or app energy prioritization, one of the goals of Jouler. Second, tuning energy consumption currently requires deep integration with the specifics of each particular hardware component, making writing cross-device policies impossible. A policy that relies on a certain feature of a Wifi chipset available on a particular device will fail on a second device if its Wifi driver fails to support the feature. Without a narrow waist enabling cross-device policies, energy management improvements achieved on a given device will quickly become obsolete given the rapid improvements in smartphone technologies. Jouler also provides novel software control mechanism enabling coordinated energy management with modified apps.

The proposed broader impact activities will both train and excite the next generation of computer scientists in energy management strategies for smartphones. First, a new graduate course on platform energy management will be developed and taught by the PI, broadening the participation of students in studying energy consumption and providing students with a unique opportunity to modify the Android platform. Second, once the Jouler policy module framework is developed, a yearly open competition will be held to drive interest in policy module development and help establish the effectiveness of the Jouler framework. Finally, we propose to integrate energy management into ops-class.org, a free online educational environment created to train systems programmers. 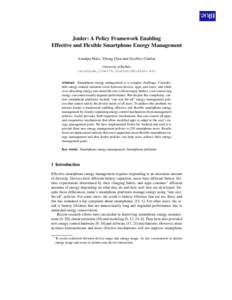 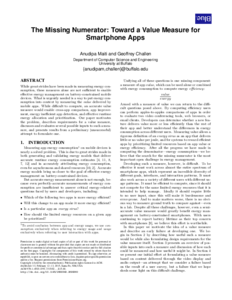